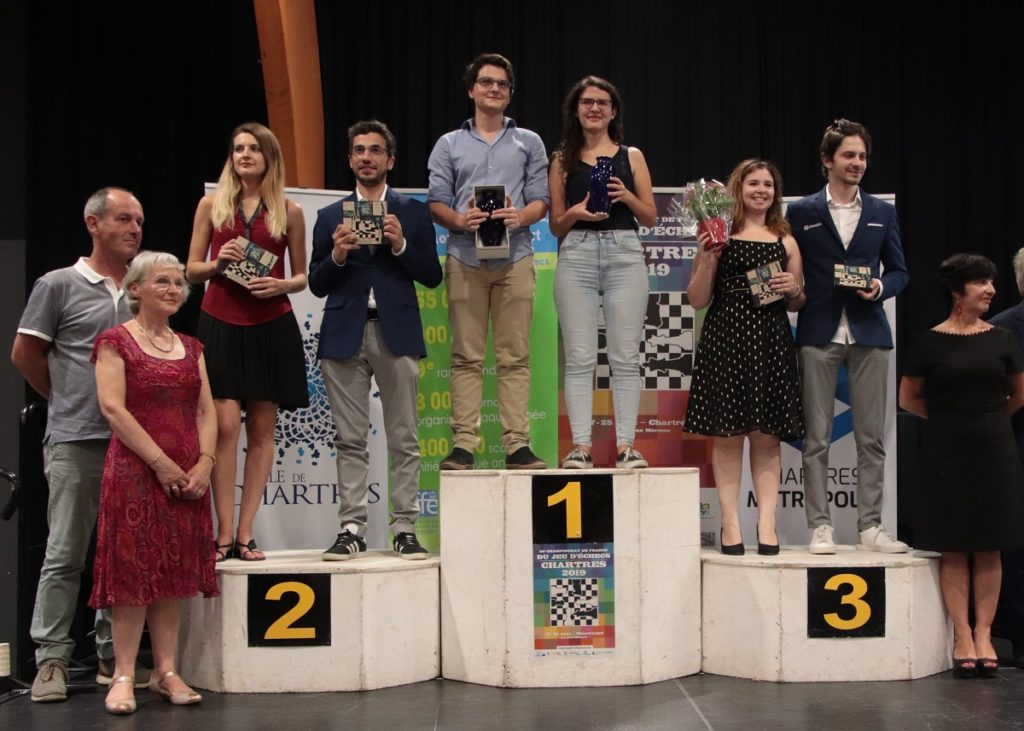 The championship of France 2019 was very tight, and after 9 rounds Laurent Fressinet and Maxime Lagarde were tied with 6 points out of 9. As a result, tie-breaks between the 2 players took place. Laurent Fressinet won the first rapid game, but Maxime Lagarde equalize in the second game. In the blitz games, Maxime managed to win the second game. He becomes French champion for the first time! 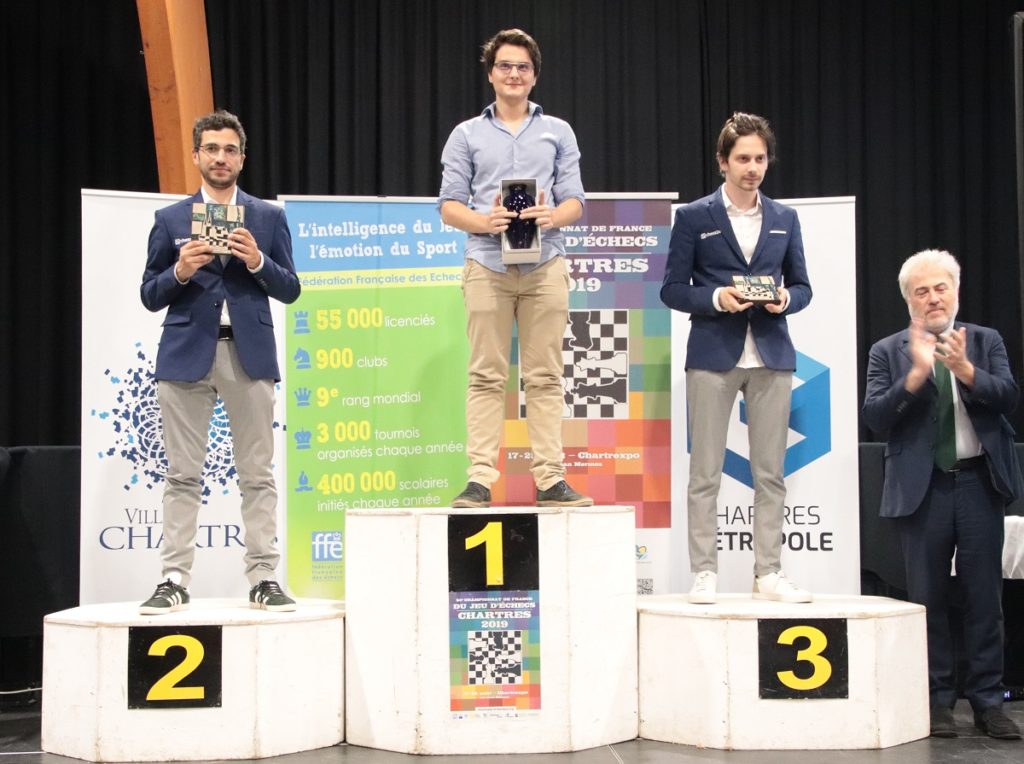 In the women’s tournament the scenario was the same, Sophie Milliet and Pauline Guichard sharing the lead after 9 rounds, with 7 points. Pauline Guichard won the first rapid game, then drew the second and she retains her title! 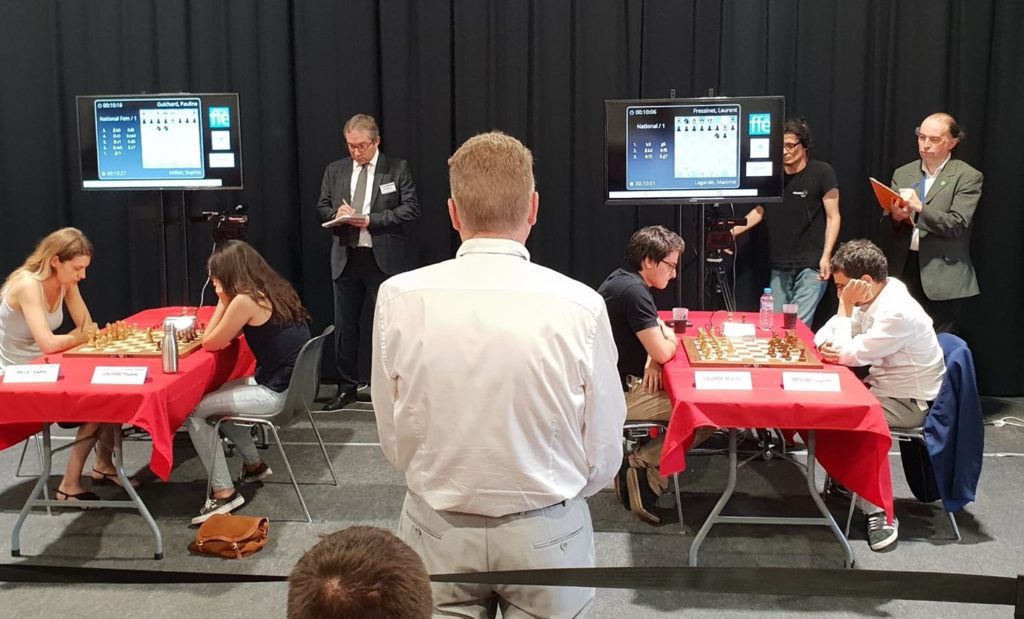 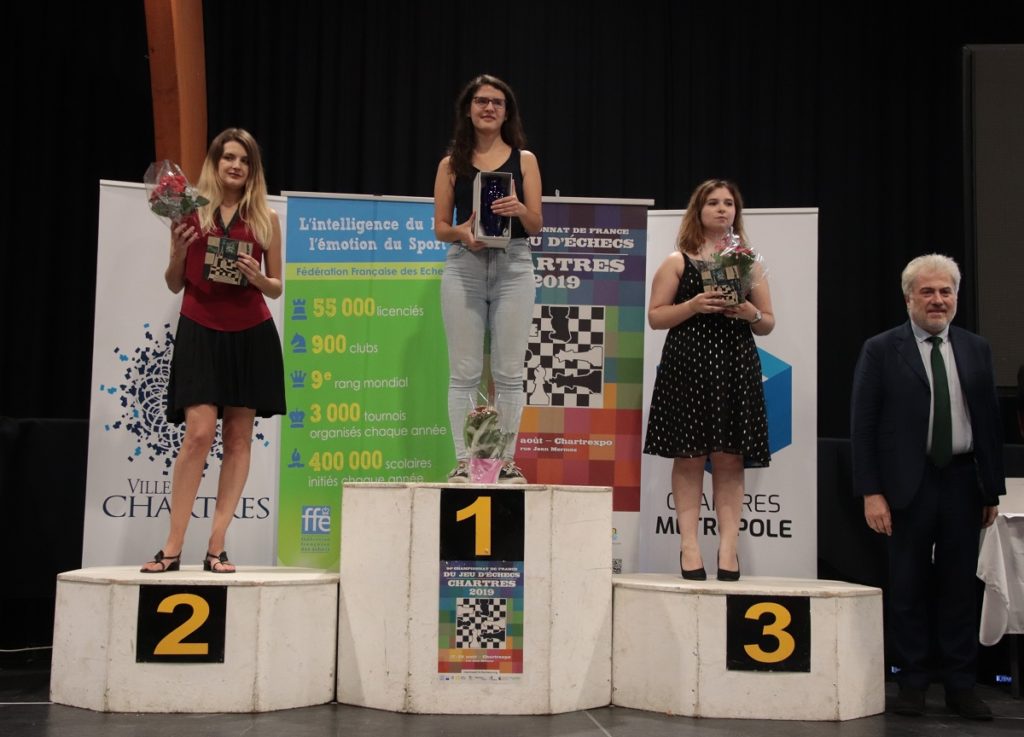 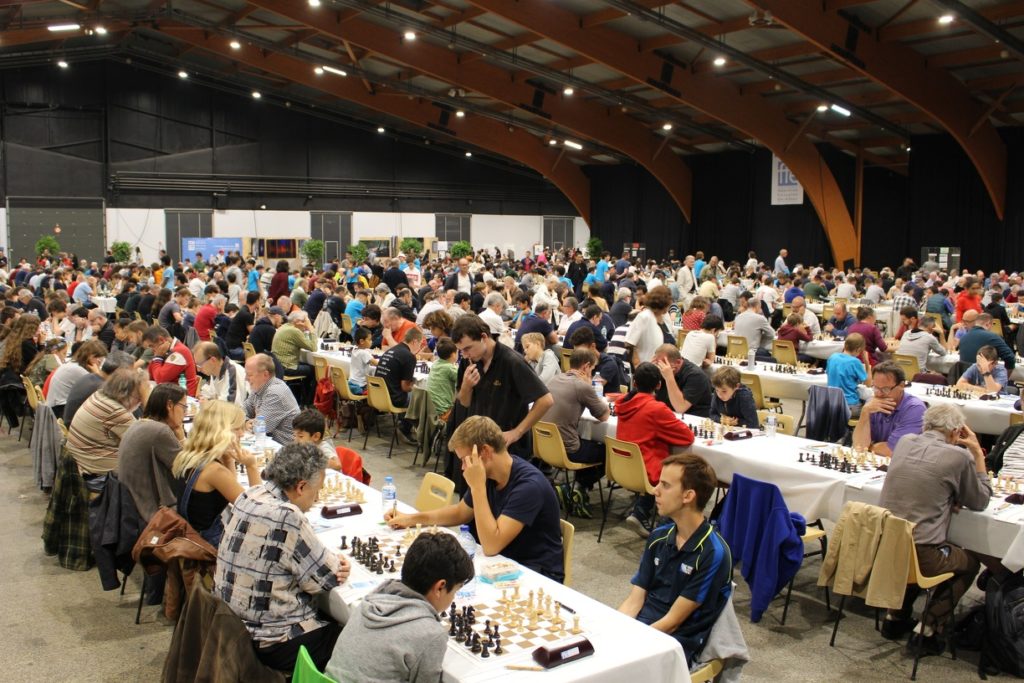 The 2019 French Chess championship took place in Chartres, near Paris. 1019 players from all around France were gathered. 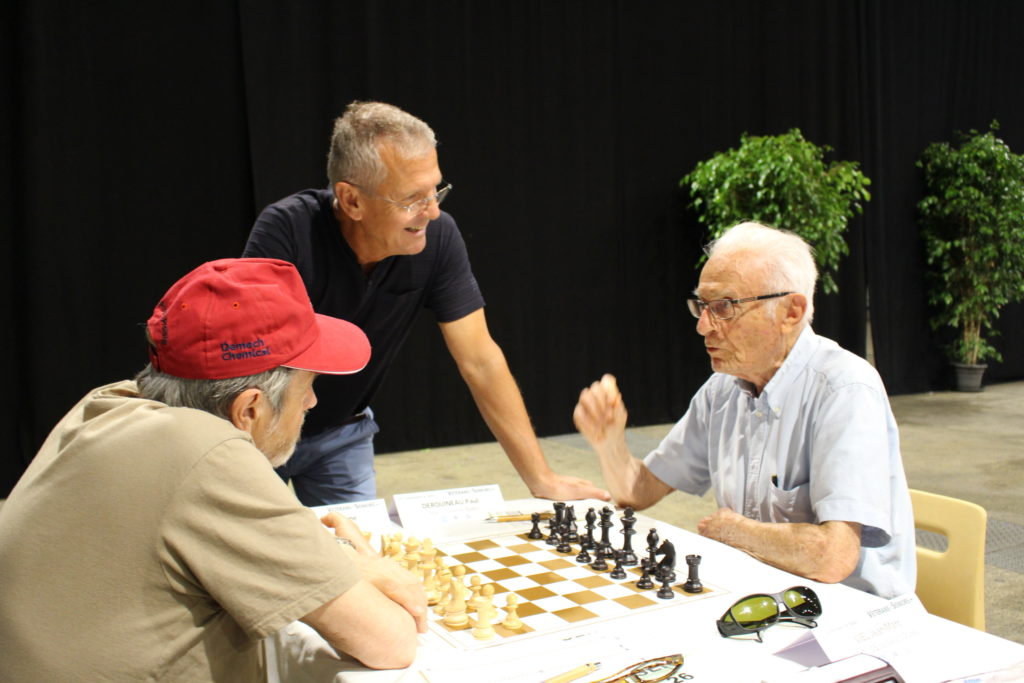 10 tournaments have been played, each player participating in the tournament that corresponds to his level. 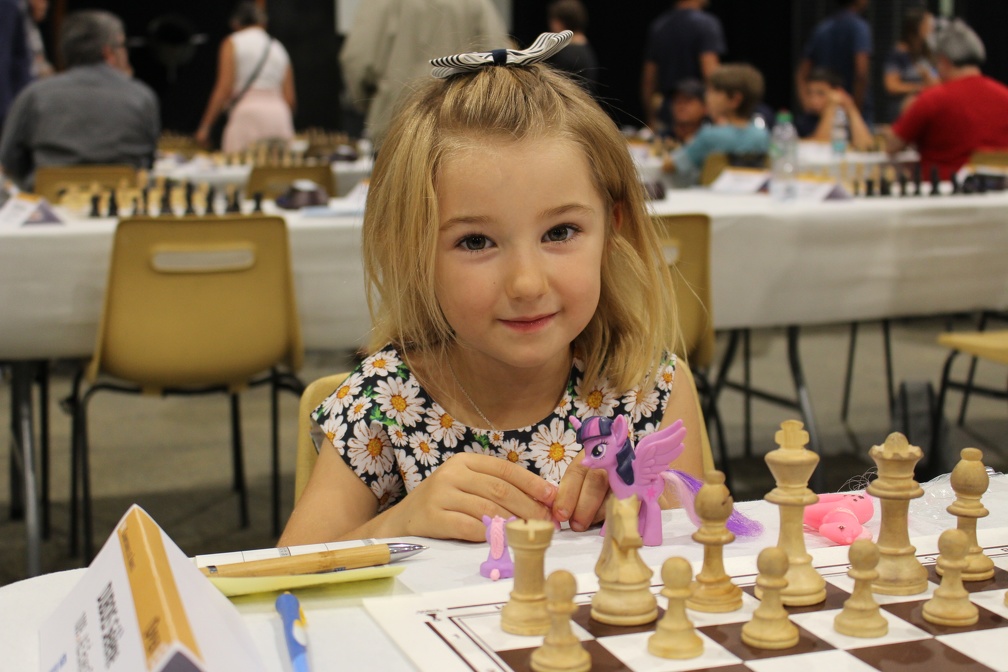 We all know that chess brings together players from all the ages: the oldest player was 95 years old, and the youngest only 6!

We had the great honor of having Anatoly Karpov visiting us. The 12th world chess champion offered a chessboard to Roger Ferry, who was playing his 60th French chess championship in a row. 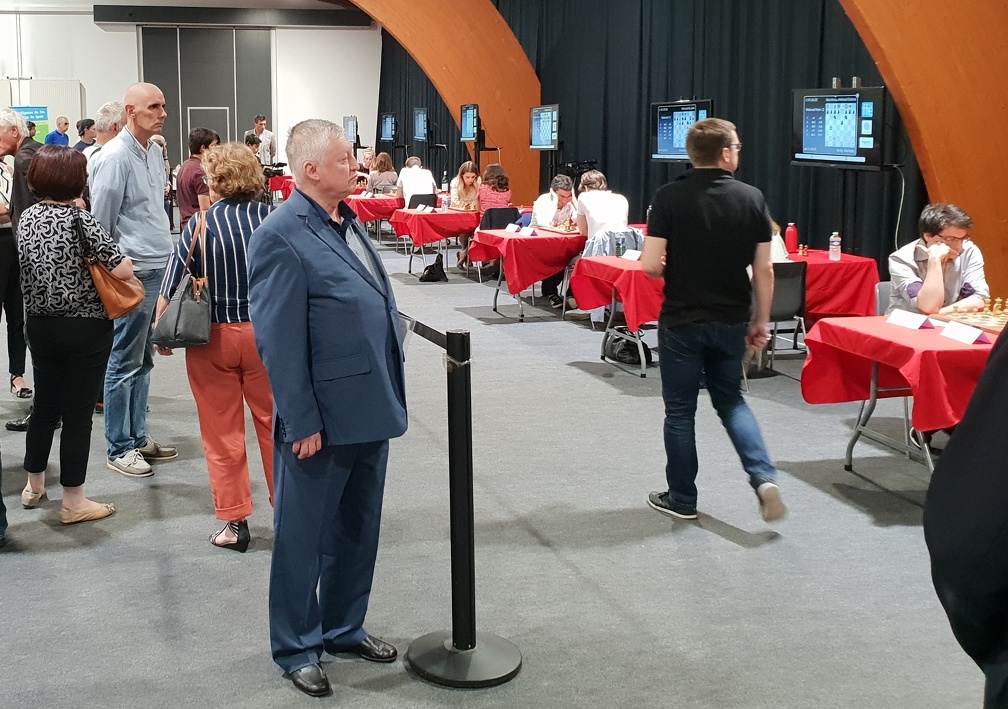 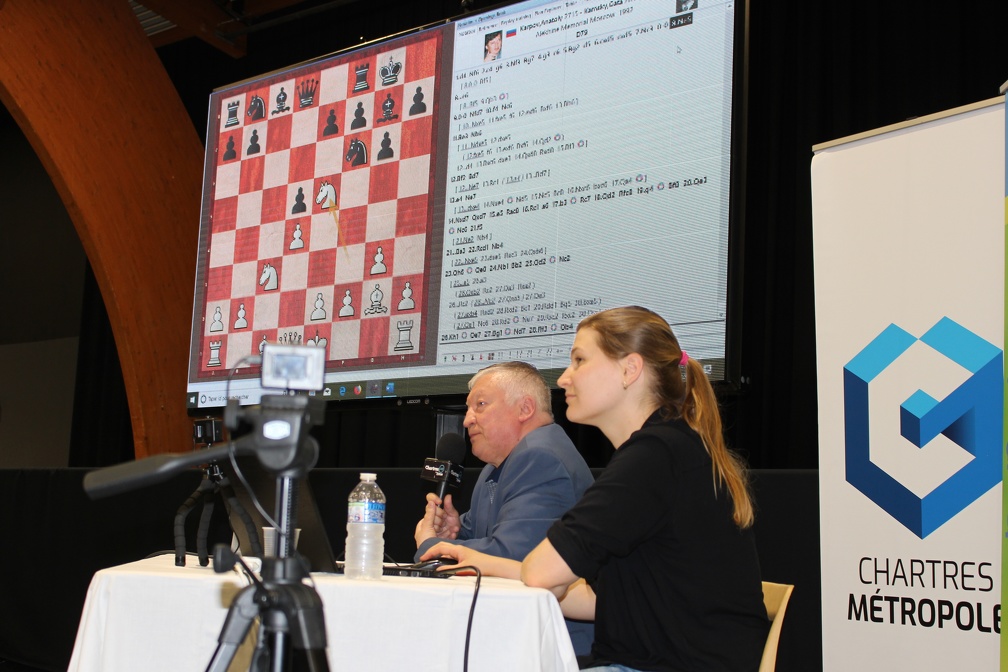 Anatoly Karpov taught an exclusive Masterclass to the players, analyzing one of his games. Then, he accepted to answer to the questions from the audience. 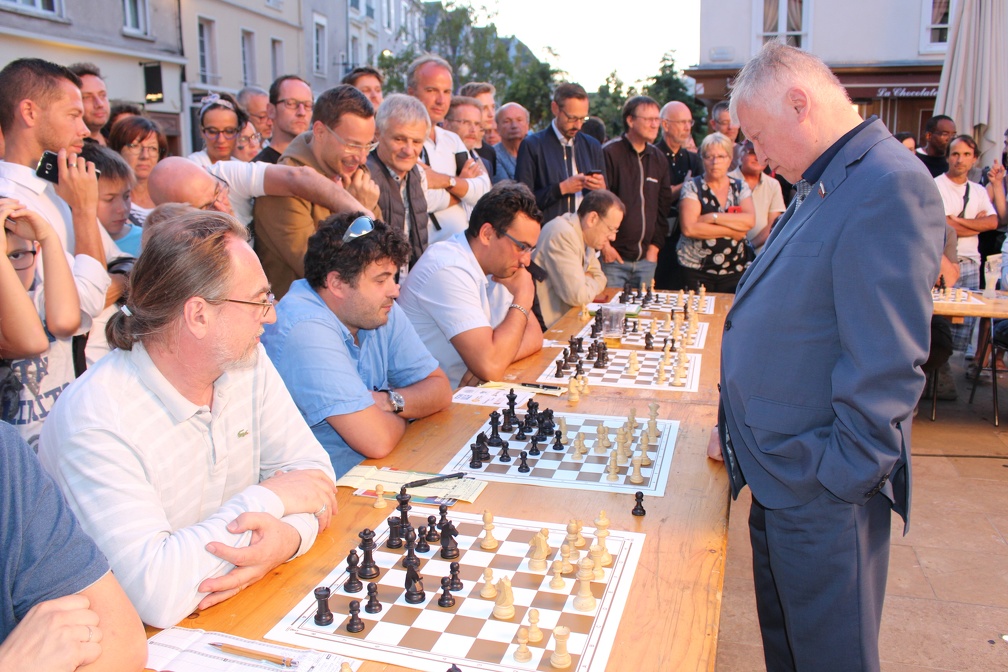 The chess night took place on thursday the 22nd: four grandmasters have been playing simultaneous games against amateurs. Anatoly Karpov was one of them, along with Sophie Milliet, Namig Guliyev and Yannick Gozzoli. 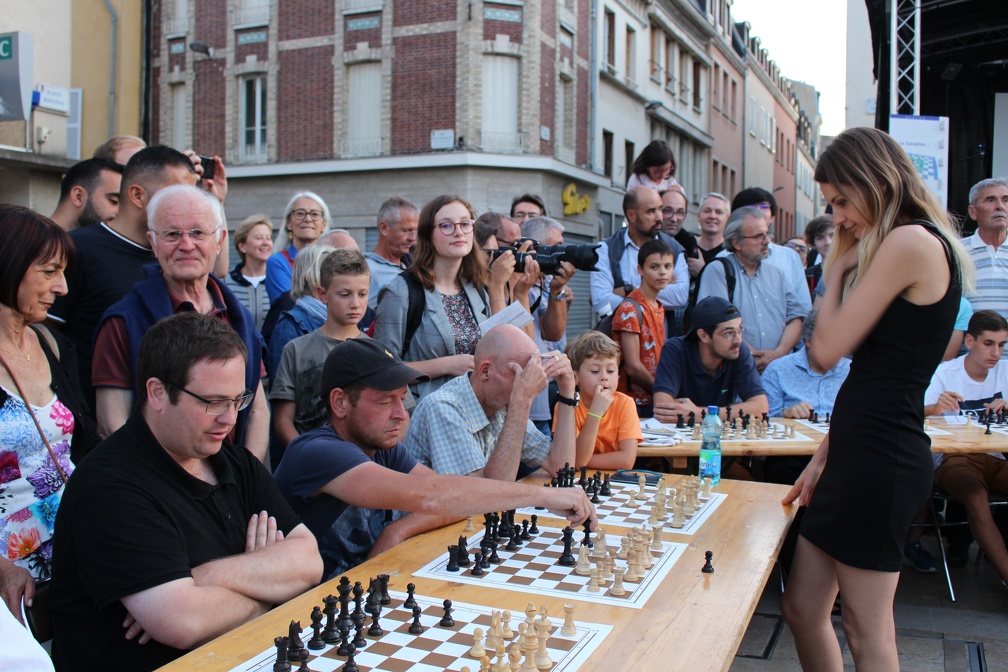 This event was a great way to spread the chess virus, beacause it was organized in the city center of Chartres. Many people came to play, or simply watched the show. 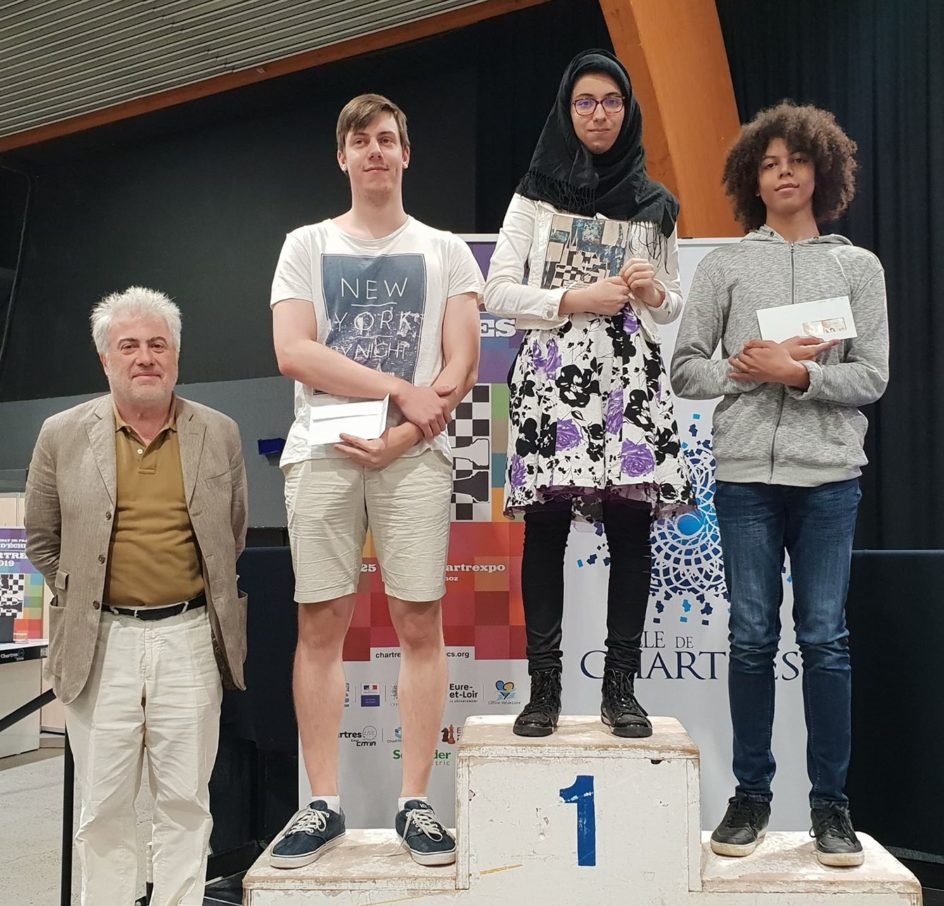 Chess 960 could be the futur of chess: that’s why the first official French chess 960 championship was organized. Liza Fretel won the tournament in a convincing way.

Chess is a very inspiring theme fort various artists: the exhibition Chess and Arts which brings together 29 artists was hosted in the main hall during the championship. Many people came to visit this creative and stimulating exhibition. 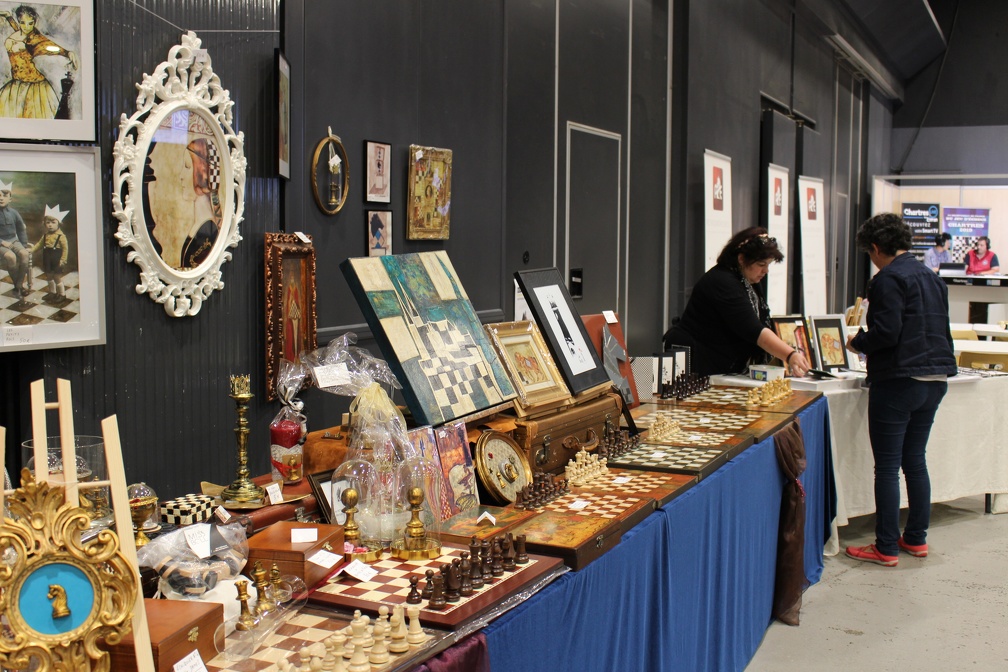 Many side events were organized for the players who wanted to play chess in the morning, including a blitz and a rapid tournament. 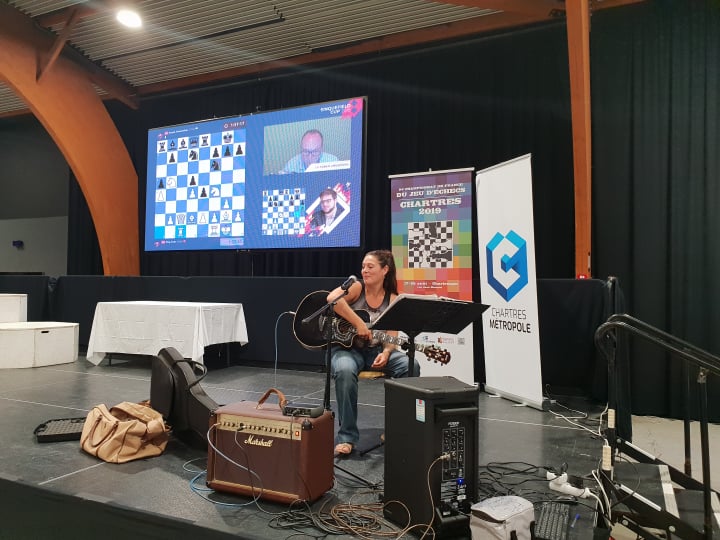 But it was not enough was for some players! Therefore, every evening, a blitz tournament took place. And on friday, music was on! 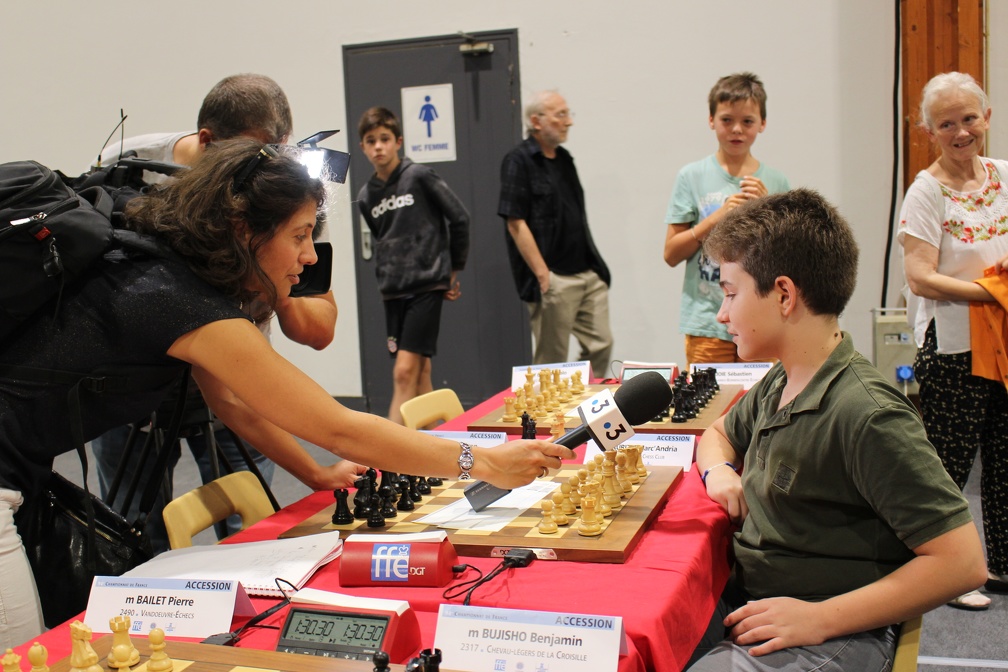 18 articles or reports have been published in the media. The young chess prodigy Marc’Andria Maurizzi, 12 years old, european champion and already member of the French national team, has been very busy answering interviews! 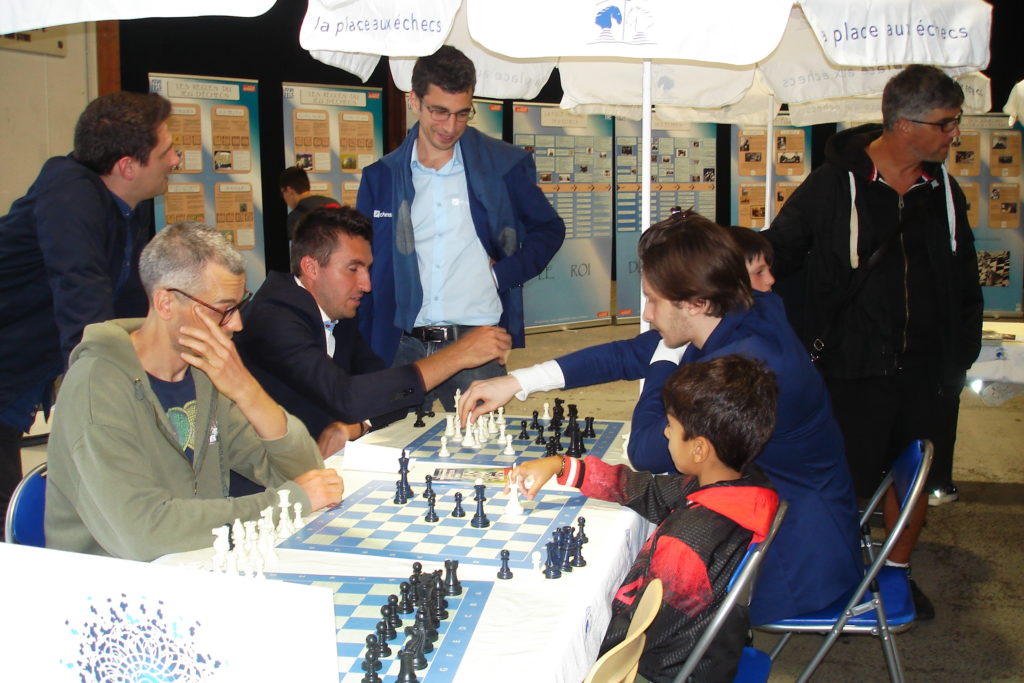 Chessboards have been installed in the city of Chartres to introduce chess to many people, with professional teachers. The goal is to spread the passion for chess throughout the city. As you can see on the picture, even grandmasters decided to play with amateurs! 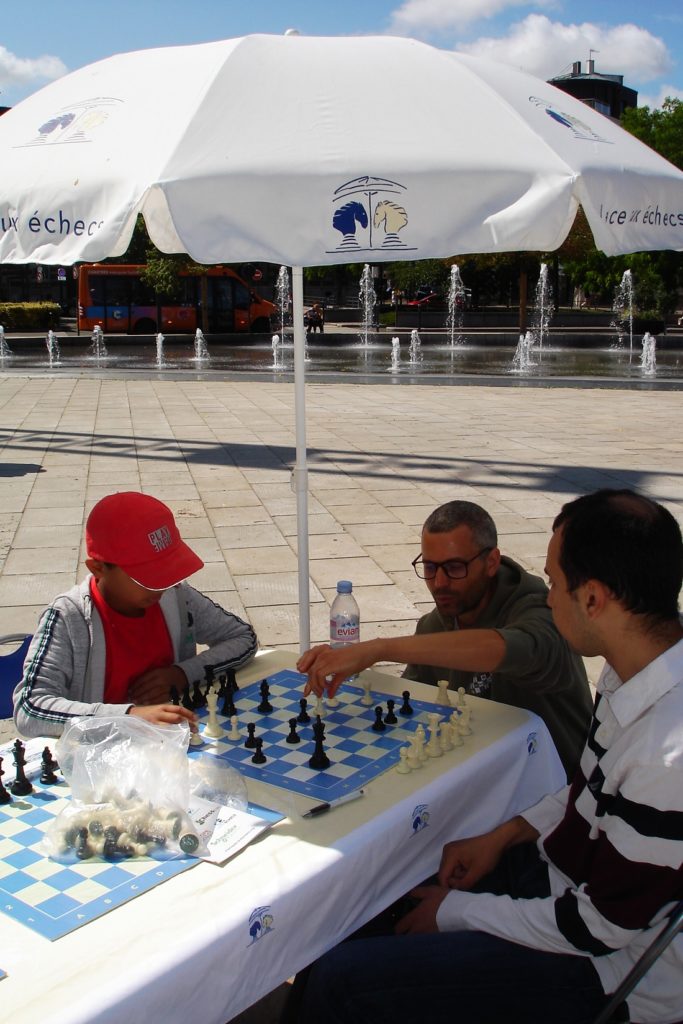 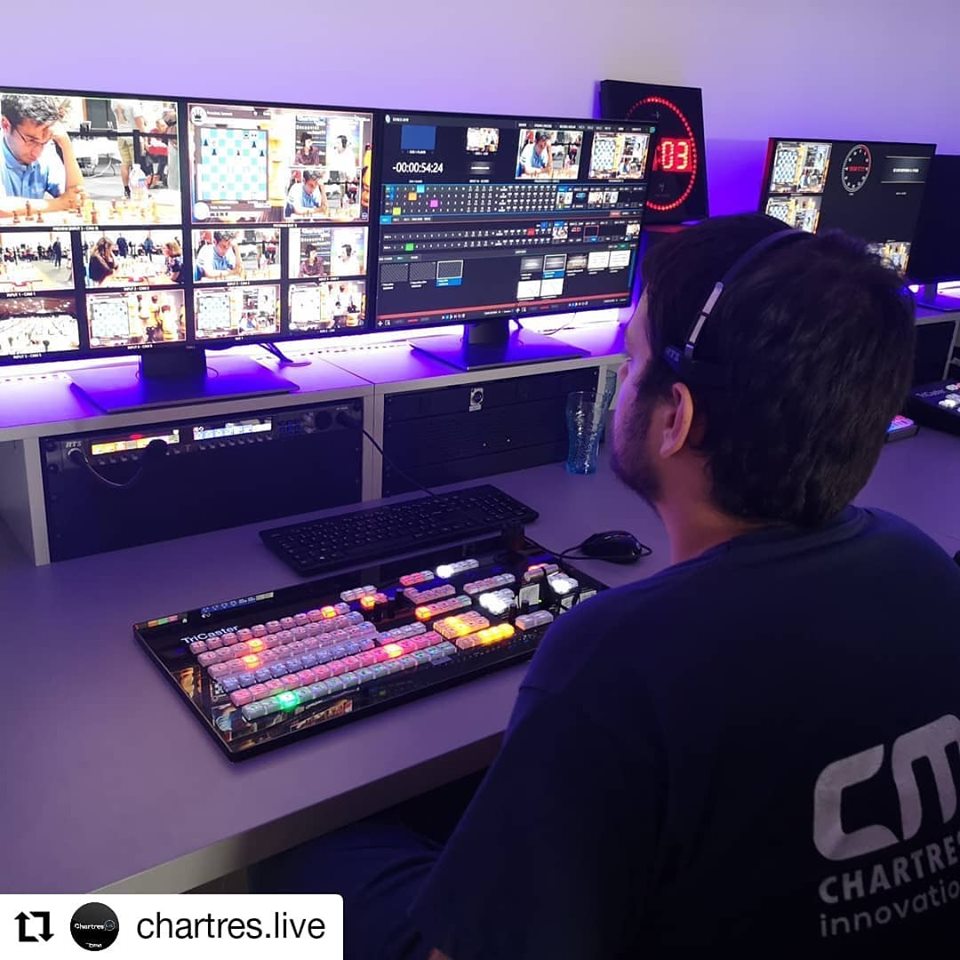 A major effort has been deployed on the Internet to broadcast the event all around the world. The live broadcast reached 500,000 views throughout the event. Many grandmasters accepted to provide top quality analyzes on the live stream. 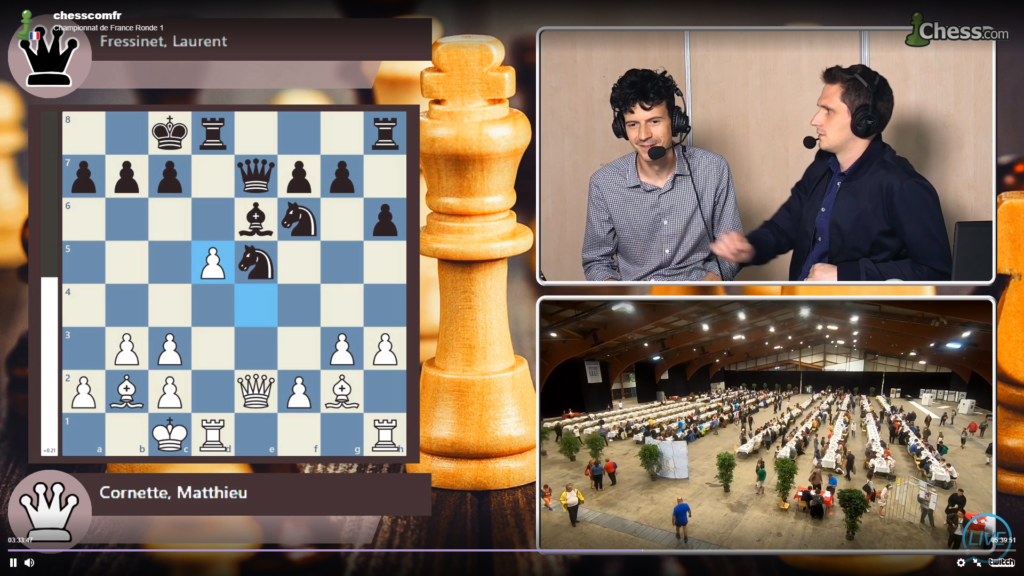 The French chess Federation would like to thanks the volunteers of the Chartres chess club, the city of Chartres, the referres, our sponsors and all the players! This event reflects the passion for chess in France, and we already look forward the 2020 edition.